All of us have come across stress in one form or another; however, the level of stress and how one overcomes that stress varies widely from individual to individual. Stress can be attributed to any number of factors, the most common being family relationships, financial hardship, job security or the death of a loved one. However, when stress is combined with anxiety, this could lead to what I refer to as ‘washing-machine’ brain; when worries and artifacts you can’t eliminate from your head are regurgitated over and over. This usually results in sleepless nights and waking up frequently immersed in a pool of sweat along with a racing pulse and rapid breathing. Overall, an uncomfortable experience.

One method to alleviate stress is to induce lucid dreams.

What is lucid dreaming?

Imagine this. Once you manage to control your breathing, think positively and try to remove self-perpetuating thoughts out of your head. You may become so relaxed that you have the sensation of waking up but not actually properly woken up, but rather in that state of limbo where you could easily drift back into deep sleep. You are aware of your surroundings in this state of limbo although everything will appear in a sort of half-light. There may be some familiar objects around you where you normally sleep; however, not all is quite the same. You are not moving but rather you fixate on an object around you; whether it is a picture on a wall or even a stain on the floor. You then have the sensation of gravitating towards it as if you were being absorbed into the object you are gazing at. During this moment, it is crucial that you avoid outside thoughts as this will throw you into a fully awakened state. Also, outside noise could interrupt the transition into a lucid state hence the need to be in a quiet environment. Once fully immersed into, you may feel that you are floating on aether. You will be able to walk or even float in your surroundings in which you are sleeping in, or you could be succumbed into another landscape. In most cases, you know that you are lucid dreaming; however, there are a few ways to find out if you are in a lucid-dreaming state. Glance at a digital clock and try to read the time. If the display on the digital clock looks gibberish (as in the article photo with the red LED display), then this is a surefire way to tell you that you are in a lucid dream.

Some of us may be reminded of a science-fiction film called Inception where dreams of others are penetrated by outsiders to seed an idea into another person’s memories. In lucid dreaming, you can control your surroundings to a certain level of degree but this is more difficult than you think because the logical side of your mind simply may not accept it. It is easy; however, to move around including transitioning through solid objects. Being able to fly is certainly not logical but it seems easy enough and is a common experience shared by most lucid dreamers. Maintaining a lucid dream can become difficult when reality kicks in and it is, at this point, you experience the disappointing sensation of not being able to perform all those illogical actions like flying or walking through walls. You then become fully awakened.

How do you start lucid dreaming?

I can only relate from my personal experiences, but lucid dreaming requires the ability to have some sort of way of trying to remember your dreams after you wake up. There is a very short timespan between the moment you begin to wake up and when you are fully woken up in which you have a strong recollection of what you were dreaming about. Some years ago, I kept a dream journal on the bedside table in which I can pen down (usually a highly messy scrawl) as much as I could remember during this timespan. Reading the journal later in your awakened state reinforces the events that have happened in your dream with the greater likelihood of revisiting or continuing the dream where you left off. When revisiting these dreams, there is a growing realisation that you are self-aware that you are, in fact, dreaming, which leads to being in a lucid-dream state. Essentially, the more you do this, the easier it becomes to be lucid.

Lucid dreaming, at least for me, requires going to bed at a reasonable time without too much visual stimulation or alcohol prior to sleeping. One or two glasses of wine is fine but beyond that, being able to induce one’s self into a lucid-dreaming state becomes more difficult. Ideally, the room that you sleep in must be well-ventilated, comfortable and quiet. Interestingly, there is a hotel I often frequented on business in Melbourne called the Art Series Blackman whose rooms seem to be highly conducive to lucid dreaming. Moreover, the hotel provides leaflets for patrons staying in its rooms describing the art of lucid dreaming. Perhaps it is something to do with the creepy artwork by Charles Blackman portraying Alice in Wonderland adorning all the rooms and corridors like the one pictured below!

After much practice with lucid dreaming, one can build up an alternative world with its own sights and locations which may be revisited simply by conjuring them up during sleep. Quite often, some of these sights and locations can be connected ‘geographically’ to each other with some being similar to actual places in the real world (although often with subtle differences). Once one becomes familiar with this ‘dreamworld’, one will have the awareness to avoid those places which could induce melancholic or cathartic feelings and instead, choose and revisit those positive locations where stress can be offloaded. For those interested in a fictional account of an alternative world through dreams, look no further then H.P Lovecraft’s fantasy novella, Dream Quest of Unknown Kadath.

Lucid dreams can also spawn brilliant alternative ideas; for example, Mendeleev struggled to find a way to classify natural elements but during a dream, the idea of creating a periodic table of elements was spawned (pictured below). Elias Howe dreamt up the idea of inserting a hole in the needle of the sewing machine to complete the stitch, allegedly during a bad dream in which he was being stabbed! Simply put, a lucid dream often removes logical boundaries present in the real world allowing the individual to think out of the box. 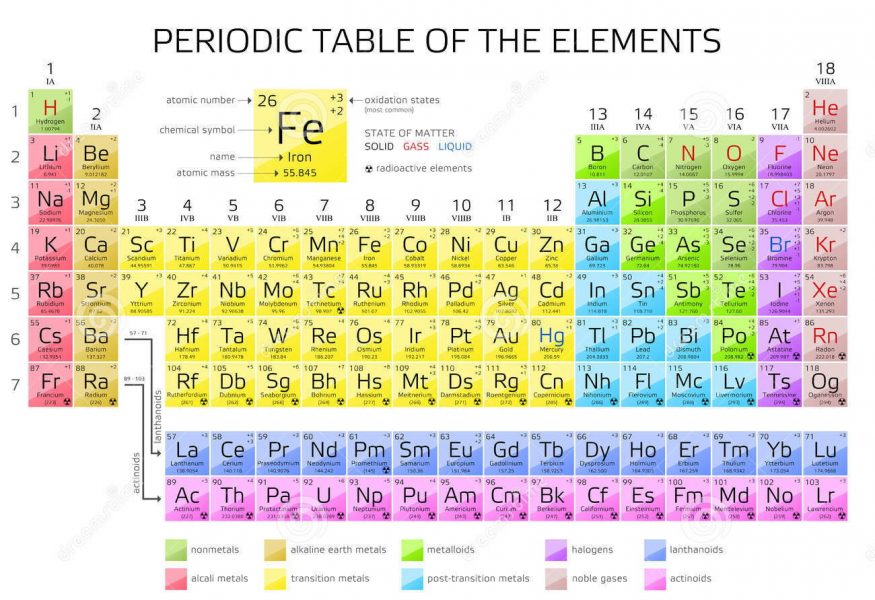 Everyone deals with stress in their own way but ultimately, the goal for those with stress is to purge out of the mind those elements in the mind that is causing it. During the daytime or periods of wakefulness, this may be achieved by combining positive distractions, physical exercise and/or engagement in a familiar hobby or interest. Alternatively, one can confront the source of the stress by ‘jumping back in the saddle’ of the event or activity that created the stress in the first place. Stress combined with anxiety is usually most problematic when it comes to getting a good night’s rest. If one can relieve some of their stresses and anxiety through meditation or some other calming form of activity prior to sleeping, one might be lucky enough to slumber deeply enough to be induced into a lucid dream.