Your GPS Secretly Wants You to Get Lost

Shôn Ellerton, December 9, 2019
Not being able to read a map and totally relying on your GPS giving directions can lead to interesting results.

I remember hearing a joke many years ago. It went something on the lines like this. A gentleman was walking in one of the rougher areas of Newcastle (in England) and was totally lost. He spots a nun walking on the opposite side of the road and approaches her. Although she was dressed in all her ‘nun’ gear, she had a pin that exclaimed, ‘Jesus is Bollocks!’ The lost gentleman certainly took note that even the nuns are a bit on the dodgy side here. He asks her where he can find the nearest train station. She then said, ‘You walk up two streets here, turn right. Just a little way up the hill, you will see a paper shop. Go in there and then buy your own fucking map!’ Oh well, that was in the day before GPS devices were common.

On the radio the other day, I had to contain myself from chuckling out aloud during a commentary citing various cases where car drivers got lost using their GPS (global positioning system) devices using their mobile phones or in-car navigation systems. Some of the stories seemed way too outlandish to be true; however, after delving into the subject in more detail, my reservations were quashed almost immediately. There really are people out there who are either one or a combination of being totally unaware of their surroundings whilst driving, completely useless at reading a map, no idea what a compass does or basically just being plain stupid.

A nice little trip to Devon

More than 10 years ago, I remember an article in the UK featuring the case of an ambulance driver who was destined to go from Maidstone to Birmingham. He, one hundred percent, relied on his GPS from start to finish; however, for some reason or another, ended up on a 150-mile detour due to an error by accidentally including or failing to omit an intermediate stop in the GPS setup. That may all be very well except for the fact that the intermediate stop was the city of Exeter, in Devon, a very long way indeed from the intended route! What makes this so mind-blowing is the fact that the driver (native to the UK) had absolutely no sense of geography of the country. His GPS told him to exit off the M25 onto the M3 towards Exeter which is understandable if one thinks Exeter is on its way to Birmingham but surely the driver would have noticed the signs that say THE SOUTH WEST. Passing nearby Stonehenge and roads veering off to the right going to Oxford might have aroused suspicion? Not at all. He just kept on going convinced that his GPS was taking him via the best route. Thankfully, the trip did not involve a patient but only an errand to deliver the ambulance back to its correct origin. Had a patient been involved, it could have turned out to be a ‘not-so-funny’ story unless the patient miraculously recovered during his trip and offered thanks to his ambulance driver for a lovely trip to Devon. After, of course, inhaling copious amounts of laughing gas to make the trip …. more enjoyable? 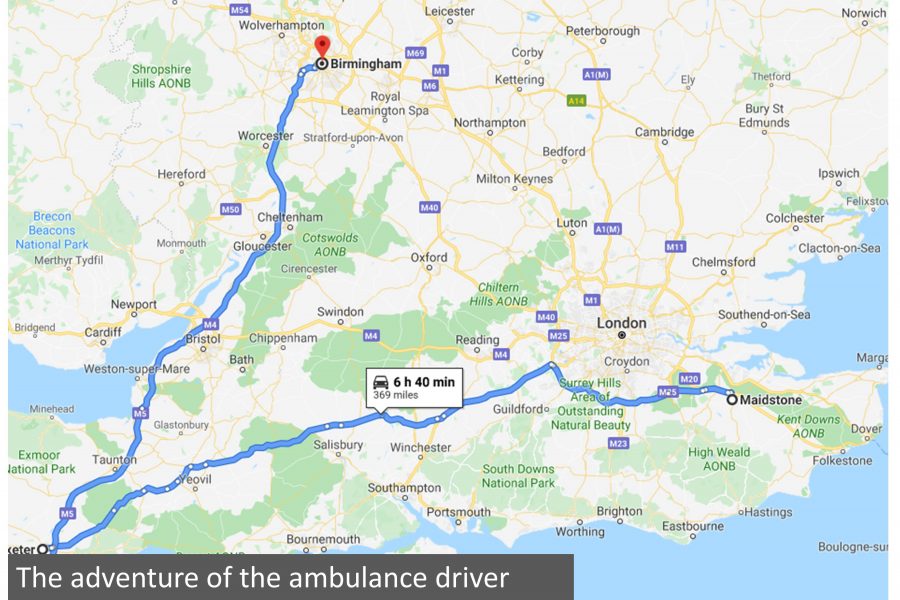 However, there is a dark side to getting lost. Well, of course there is. The radio commentary then began to mention the phrase, ‘Death by GPS’, originating from road travellers getting into very sticky situations like driving in the blazing heat through California’s Death Valley relying purely on GPS. Many drivers do not even bring a traditional map on long journeys anymore nor how to use them effectively. And this is a problem.

Back in Death Valley, one of the typical situations that occur is when the GPS tells you to go that way for the next three or four hours to get to the next town only to find that you’ve been following a road that was disused for the last ten years and has been blocked off at the far end. The car, in question, then does not have enough fuel for the return trip leaving the travellers stranded in the middle of nowhere. One would half-expect that there would be a fleet of abandoned cars and the odd skeleton or two at the end of the road should other travellers make the same mistake! 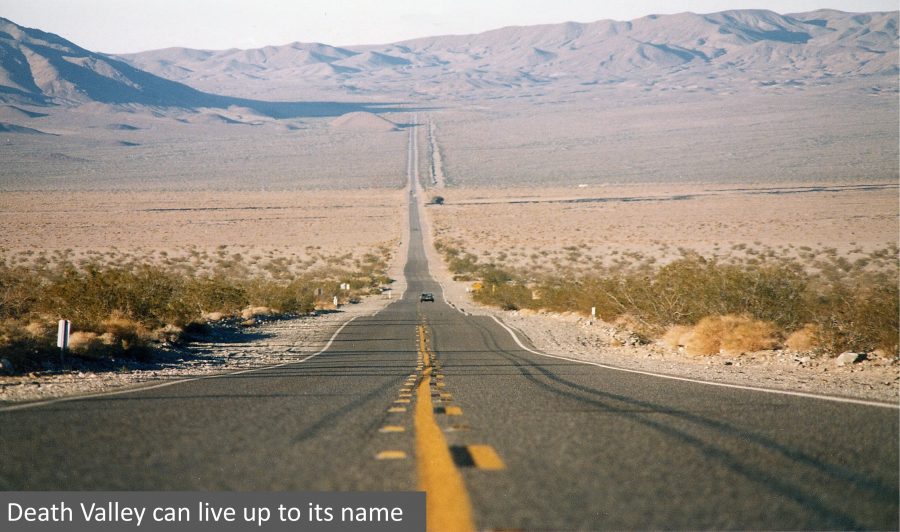 GPS has its uses of course!

Now there is nothing at wrong with using GPS. I use it when I really need it. For example, hunting around city streets to get to an address or in country areas riddled with confusing twisty roads along with bad signposting.  In the dark, this is especially handy. However, if you take the road, say from Adelaide to Melbourne, you really do not need a GPS except for, perhaps, the final destination point in Melbourne at which point you’d only need to switch it on during your approach to the city. You could keep it on during the main bit of the journey as it kind of gives you an idea of how many hours it will take to get there, but for crying out loud, turn the annoying voice bit off, unless you like being reminded every ten kilometres or so by a robot that you are nearer to your destination. But most importantly, look where you are. If you find that you are driving on an increasingly rough road and suddenly end up at a dead end, something went blindingly wrong, whether it was input or computational error or just plain incompetence.

Mind you, this seemed to be a common occurrence for me in Wales whilst driving in the middle of the night amongst the hills, although, to be fair, this was more than 10 years ago when in-car navigation systems were a little more basic. On more than a couple of occasions, I would be driving in fog in the night on a well-paved road flanked by tall bushy hedges only to find the road had narrowed to one lane and then to further narrow again complete with a grassy strip in the middle of the lane and then to end up at a farmer’s gate. I turn the engine off, step out of the car and in thick blanketed silence except for the occasional bleating of a sheep or two, it dawned upon me that, not only was I alone in the fog, but realised that this, indeed, was not the road to Machynlleth. 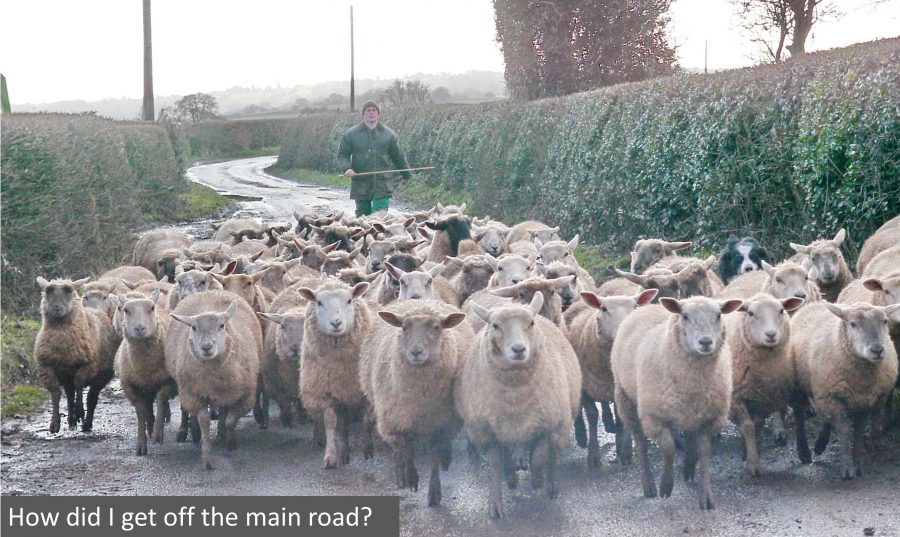 Another source I read concerning reliance on GPS over reading a traditional map is the gradual loss of the brain to undergo ‘cognitive math’. I’m no expert in how the brain works but the article describes how the brain absorbs patterns, shapes and references while reading a traditional map and how it renders an overall picture of where things are rather than being confined to an A to B strip on a GPS device being hoodwinked from anything outside of the narrow strip.

We all think a little differently of course. For example, if I ask for directions by a local villager and he replies that it’s easy to find and all you have to do is go straight down the road, turn left at the old house then turn right at the old mill, continue for a couple of miles and head up the dirt track to the top of a rise; to be honest, I would have already forgotten what he was talking about after the ‘old mill’ part. However, if I was given a 10-second view of a map showing the way (and not a cruddy hand-drawn one), a virtual image of that map would be in my memory with astonishing clarity.

There is one caveat with maps as far as I am concerned. They all must be facing north. There must be a standard reference. For example, if you turn Australia upside down, it looks rather different. Any map that is not conforming to north or, at the very least, not have a compass rose should be deemed unfit for purpose. Anyone who finds it frustrating that our iPhones don’t lock in North when scrolling about; you are not alone!

The overall picture and scale

Another problem with using GPS instead of reading a traditional map is the perception of scale and getting an overall picture. It’s not so much as a problem but more of a difference in the way we process information. Say you’re on a road journey from Lisbon to Stockholm, a car journey of nearly 3,600km. You look at the GPS and it says you have 10 hours or around 1,000km to go. Fair enough, that could be the case, but would it not be more interesting to see where you are and what surrounds you? That’s what that map of Europe stashed in the back of the passenger seat is used for. Just by looking at the overall route, your mind can give you a far clearer picture of where you are on the journey. And a far more interesting one at that.

I’ve never had any issues with map reading. In fact, I love maps and atlases having collected boxes of fold-up maps whether they be British Ordnance Survey maps, National Geographic, US Rand McNally atlases or detailed country fire service maps of South Australia, which are, indeed, very splendid. I have a very large world atlas in the living room and a couple of globes of the earth, one physical, the other political. I teach my 4-year-old son how to use a map and how to use a compass. His favourite pastime in the car, apart from sleeping, is to follow the atlas when we’re on country trips. Instead of saying, ‘are we there yet?’, he says, ‘where are we now?’ at which point he will find it on the atlas himself. Magic! At home, he will point out the route we did when friends and relatives visit us. Never underestimate what kids can do at an early age with maps. If we do not teach our kids how to navigate and read maps or take an interest in them, it makes navigation in their later years far more difficult.

Sadly, there are many adults out there who don’t know how many degrees there are on a compass, what the symbols on a standard map mean, how to use the scale bar or even know how to locate their own suburbs on a street atlas. I’m one of many; however, who, on occasion, finds it notoriously difficult to fold back some of these maps to what they were, but that’s just my lack of patience when folding things up nicely! The problem for many is that they just don’t care or have any passion for the power of navigation and the beauty of maps having, instead to be one-hundred subservient to the robot voice on their GPS-enabled mobiles. We can only hope for the best that children are learning the skills of navigation and map-reading in school because if they are not learning these skills from parents, we are all going to become lost!