Be a Daredevil and Hire an E-Scooter!

Shôn Ellerton, November 3, 2020
E-scooters are a great way to explore your city and they’re also a lot of fun!

This year, I discovered one of the more fun ways to get around in my city of Adelaide by hiring an electric scooter, or for short, the e-scooter. For those not knowing what it’s all about, companies like Lime, Neuron, Beam and Ride, to name but a few, have set up networks of hireable e-scooters in which anyone, by use of an app on a smartphone, can scan a code on the scooter to release it for use. Once it is no longer needed, the rider parks it, taps the app on the smartphone to end the trip, and the scooter is then locked and ready for another rider. Tariffs vary from company to company, but the model usually comprises of a prepaid structure accessed through a smartphone app in which an initial flat fee is taken plus additional costs dependent on time and distance.

These scooter apps use embedded street maps of the area overlaid with available scooters telling you which way and how far to walk to the nearest scooter. At the time I became aware of them, there were two companies in Adelaide; Beam and Ride, which had a competing network of scooters. The Beam scooters were purple and the Ride scooters, a dazzling yellow colour., the Ride scooters are no longer there having been replaced by the much heavier and sturdier Neuron scooters, which sport a lovely shade of orange. Beam went out of existence but re-emerged recently with an improved scooter with bigger wheels and more stability.

For quite some time, I’ve seen a growing proliferation of brightly coloured scooters bedecking our roadsides in central Adelaide. Now and again, I spot a few riders zoom up and down the pavements from time to time and wondered how easy it is to get from A to B without having to use a car or wait for the tram. But having never been on a scooter before, I didn’t pluck up the courage to try it out. Being totally useless and inept at using a skateboard, I kind of envisaged using a scooter to be tricky to use but having tried a regular (non-electric) scooter out when my son got his, I found them amazing easy to use. So, I downloaded the Ride scooter app and went looking for a scooter to hire! Just for fun.

The first time I tried one of these e-scooters out, I must have looked like a complete cretin trying to get to grips with it. The scooters are supplied with a helmet which, no doubt, has been on many other heads, a prospect I was not so enthralled with. However, as it’s the law to wear helmets, and not really having any idea if I was going to fall flat on my face, I reluctantly donned it. A little electronic woman’s voice inside the front panel of the scooter informed me that the scooter is ready to go and to ride safely.

I mentioned above that the newer scooters have become heavier and larger with big wheels. And there’s a good reason why. When I flicked the acceleration lever on the handlebar, this little yellow Ride scooter shot forward like a bat out of hell before I got my foot on it. I learnt that it’s a good idea to get your weight on it first! And then I was off. It was a twitchy little fella though and with tiny wheels. Any dimple or crease on the pavement gave me grave concerns that this is going to trip over itself with me following shortly afterwards head over heels. It moved at a lively pace and I was wending and weaving around walkers, joggers and unforgiving bits of street furniture like light poles, road signs and utility pillars. Unlike a bicycle, you tend to use the scooter on the pedestrian sidewalk rather than the road. I was crossing main roads haphazardly. I was crossing alleyways in hope that a car wasn’t pulling up to a stop. I nearly knocked someone in the shin when I had to pull away from a stop. I was getting overconfident and, frankly, out of control. But it was great fun and an excellent way to get from A to B quickly.

I had a few more trips in the following weeks with a Ride scooter during times when I needed a little bit more adrenaline drive for the day. Meanwhile, a new outfit called Neuron was littering the streets with much heavier bright orange scooters fitted with bigger wheels. The footplates are much larger easily able to accommodate two people. The helmets are locked in a release catch until the app is used, which seems sensible considering that helmets were often missing from the Ride scooters. I tried a Neuron e-scooter out, but the sense of excitement was gone. It accelerated much more slowly and had ‘smarts’ built into not allowing you to go beyond a certain speed in more crowded areas. To be fair, this is probably not a bad thing from a safety point of view. It was still a pleasure to use but it was like driving a car instead of riding a motorcycle to cite a loose comparison. However, at least I could venture on rougher ground with its larger wheels without fear of being tripped over by a pebble.

All in all, I love the concept of the e-scooter. As with the electric bicycles available for hire in many cities, it provides a good alternative for those who want to explore the city, get some fresh air or just to use as a simple way of commuting from the train station to work if walking is too far away. The more dangerous—and fun—scooters like Ride are being rapidly phased away in favour of safer and more sturdy scooters. In Adelaide, relatively few people use scooters; however, there are many reports of accidents by e-scooters being commonplace in other cities around the world due to the volume of traffic. To be honest, I am a little surprised that the ‘fun police’ have not banned them here in Australia but while they are still allowed, I’ll make the best use of them! 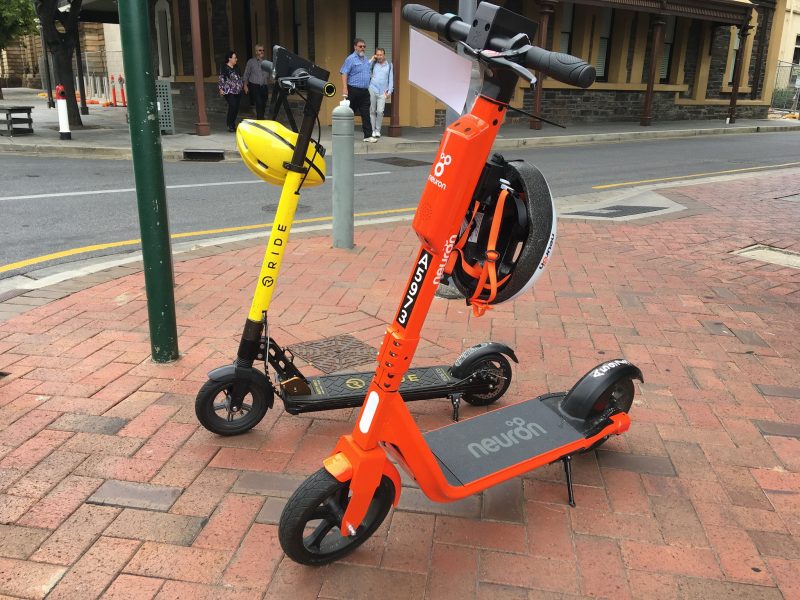 The twitchier and far more fun Ride scooter next to the much safer and sturdier Neuron scooter. 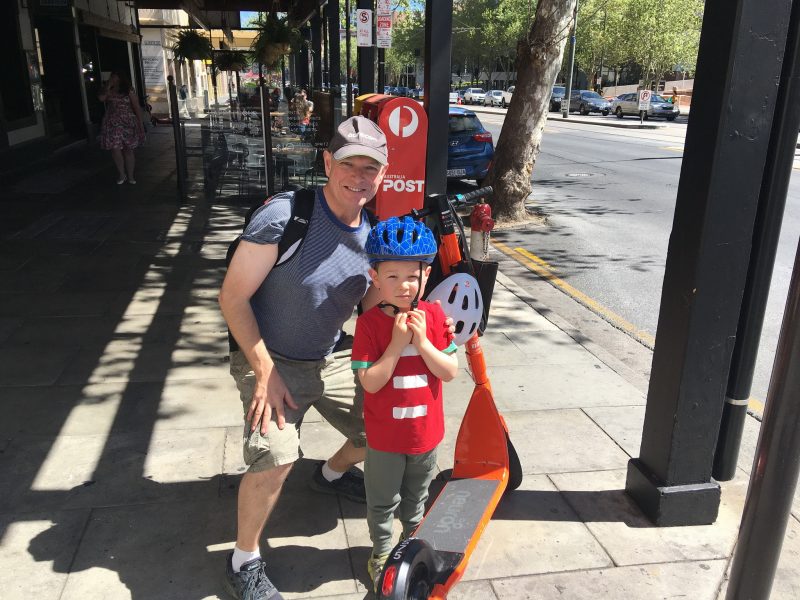 Taking my son on a Neuron scooter. He had to bring his own helmet. 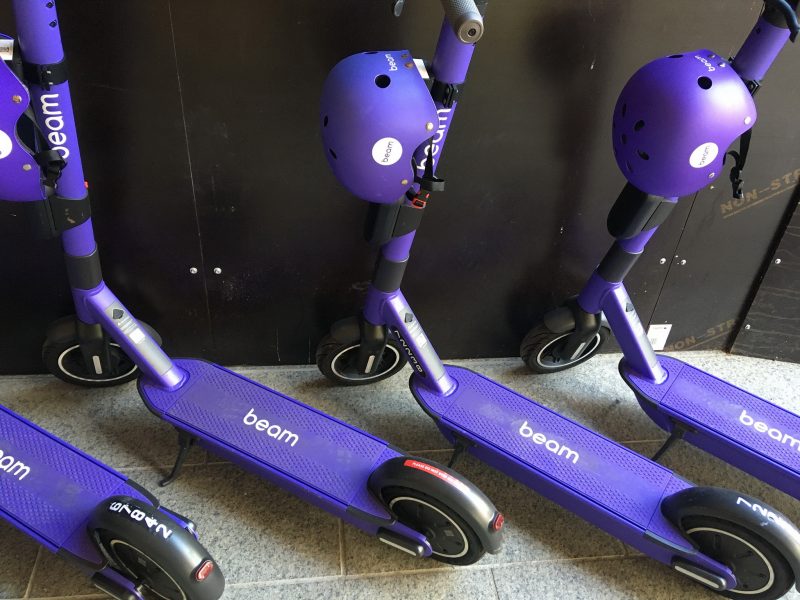 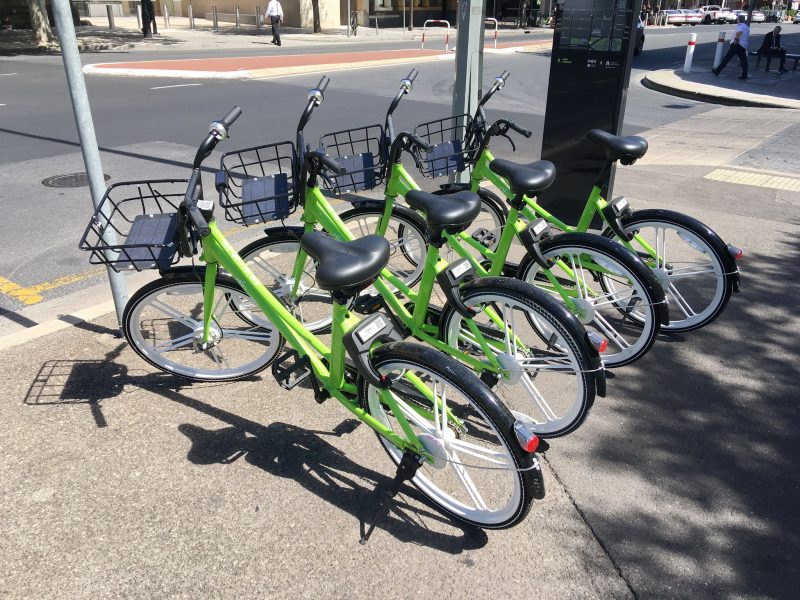 E-bicycles are also available for hire in the city of Adelaide as an alternative means of getting from A to B.