Shôn Ellerton, Jun 1, 2021
Does anyone else think Facebook has dried up into a barren wasteland of mediocrity and utter boredom?

At one time, a plethora of interesting conversations, many of which challenged the narrative of the day or held viewpoints which were often regarded as controversial, was commonplace. These days, seemingly, I hold the impression that many of us are genuinely afraid to express opinions anymore which might harbour one iota of controversy in fear of retribution or being ostracised. Sad, but true.

The so-called morally-charged proponents of ‘accepted’ Facebook behaviour have deemed that posting anything other than that of inert and benign family photos and travelogues or the many number of data-harvesting polls and other not particularly informative posts, like how many words can you think of that starts with the letter F ending with K can you think of, or how many squares can you spot in this ‘eye test’, is not a place for Facebook.

And what about all the ‘stories’ which self-destruct, spawned from the brainchild of the creator of Snapchat? Does anyone actually read them? And TikTok videos? Considering that I usually read posts whilst on the train or in an environment not conducive to sound, I seriously wonder who these videos are targeted to. Anyone who watches a video on their smartphone on public transportation without headphones in earshot will most certainly get my attention. I tend not to be very tolerant on those who, with selfish propensity, insist that others need to listen to their veritable crap. Most are not, in all honesty; however, many are not so willing to take a stand but rather, to keep silent along with a mustn’t grumble mentality.

For a start, there are far fewer photos of family, friends and travel than before, which, strangely enough was one of the main reasons why Facebook started in the first place. Perhaps, not unlike the demise of the more controversial feeds pertaining to politics and religion, more of us are becoming wary of posting instances of our personal lives as well.

I’ll give you six!

1) Polls, puzzles, quizzes, and those annoying posts like ‘Name a film that …’ or, even more annoyingly, complete the sequence of numbers from mathematically impossible equations or find the odd one out comparisons. What’s worse, is that these posts generate tens of thousands of comments. Who in the name of all that is holy gives a shit? OK. So, I found 18 squares and I, shamefully, had the temerity to respond. Why? Does that make me a smart arse? So, this is what my future strategy is. Any post which is directly or shared from another post which generates thousands of comments will be duly ignored. There may be the occasional one where even I won’t be able to resist, but at least I will try to. And this is the really irksome thing. I posted a couple of, what I thought might be interesting, quizzes which got fewer than five comments, and all those from close family. So why is it when a character with a name like Snoop Dee Hoop Jack who wears a funny baseball cap and has five nose rings can post a simple meme, even something incredibly offensive like a picture of his own anus, generate tens of thousands of comments? Oh yeah, a veritable desert of bullshit out there, and literally, if one takes the last example as verbatim. 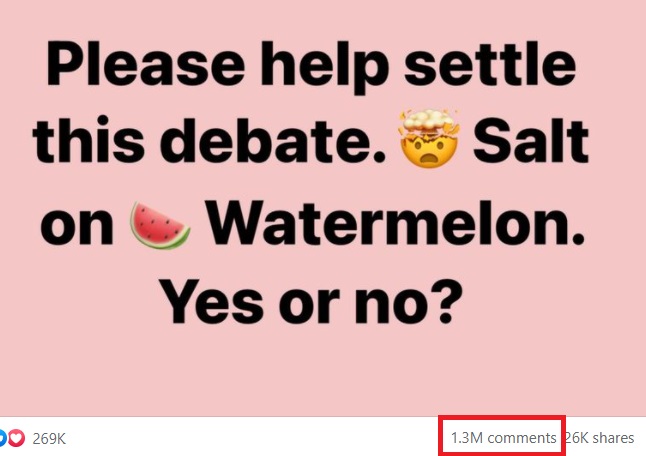 2) Stories. I once asked myself what the fuck are these but turns out it is only a Snapchat copycat which has now seemingly just hit the older generation. All of a sudden, I am awash with notifications of ‘stories’ which, apparently, have a lifetime of, what, a day, an hour? And what for and why? When did these suddenly become popular? Did the older generation just get drift of the Snapchat-type self-destructing post? I mean, seriously, Snapchat has been around for many years now and I can now visualise our younger post-millennials laughing out aloud. Hey, the old folk are doing ‘stories’ now! Better think of something new! I learnt that I can change my Facebook notifications settings to exclude stories, which I did with prompt ado.

3) Pretty pictures. Now I don’t really have a problem with these. Sure, I’ve seen some great photography in my time; however, I take far more interest in looking at photography taken by those in my Facebook feed. LinkedIn has suffered an affliction of this type of post for quite a few years, the one I remember the most being a picture taken of a snowy scene in Switzerland. The photo was nice, you know, with the Christmassy lights and the horse-drawn sleighs and whatnot, but it was not amazing by any extent of the imagination; however, one picture generated thousands of comments. And bear in mind that this is a social media site geared towards the professional world. Having accumulated around thirty thousand connections or so on LinkedIn, I decided to test this theory a couple of years ago by posting a somewhat ordinary photo I took of a muddy lake in Australia. To my surprise, it generated far more commentary than an informative article I wrote about the peculiar dangers–namely that of being shot–of owning a commercial powder-discharge nail gun. Go figure.

4) Posts from politicians. Unless I subscribe to a particular politician, why the hell am I getting posts from other politicians? And no, I am not going to add commentary to these posts as a way for them to harvest my data and to garner popularity by way of counting those providing comment, whether good or bad. Thankfully, we have the ability to block them from our feeds.

5) Celebrities and prominent individuals who post mediocrity. Please let me be clear. I have no truck with those who are friends with me when they post what they had for supper or to show what amazing piece of furniture they got over the weekend. After all, I know them, and they know me. However! I find it disappointing when I choose to follow a prominent individual like a great author, thinker, or scientist who then starts posting what his or her dinner looks like or how cute his pet dog or cat looks sitting in a cardboard box. Predictably, there are plenty of fans who will respond with comments like, ‘Yummy!’, ‘Aw! How cute!’, and other cringeworthy phrases. The tragedy is that interesting personalities like Ricky Gervais and Gad Saad, both of whom I currently still follow, have not been immune to this affliction. But I guess I’m the minority here because there are plenty of fans who like this sort of stuff, but I’m ready to disfollow them at the drop of a hat.

6) And bloody adverts! These are seemingly impossible to block because as soon as you click the button that says you would like to see less of these, another two or three sprouts out from nowhere like the head of the Hydra. No! I do not want a natural-wood organically infused aroma-scented mist and vapour electronically controlled atomiser ornamented with the crest of floral designs of roses and lilies with inlaid placid-blue and warm-red pastel-like LED low-energy lighting to supplant the soul with joy and complete relaxation. Now bugger off!

The pious superior beings who control Facebook could be doing themselves a disfavour by discouraging those who wish to submit ‘challenging’ posts with the ever-present Sword of Damocles poised to silence and de-platform them. Alternative social media platforms to rival Facebook do not seem to be, in any way, a challenge to Facebook’s dominance as of yet; however, if Facebook’s trend towards the mediocre continues, there will be a time, and the wisest of us knows not how soon, when another platform will rise in dominance to supplant it.

So here endeth my rant of the day!