The Four-Dimensional World of Wikipedia

I love that we have resources like Wikipedia, the world’s most well-known online encyclopedia, in which we can find, at the touch of the button, any information that we could conceivably be looking for. But most of us are not aware that Wikipedia has something VERY powerful up its sleeve. Something so very powerful that, having recently stumbled upon it myself, I blankly wonder how I didn’t see this before. The ability to research any topic, not only in the present, but in the past as it was written.

Every time an edit is made, a new version is listed in the View History tab of any Wikipedia page. Moreover, that version can be viewed as it was before the edit was made. This is astonishingly powerful and allows the researcher to look at any topic at any point in time, provided an edit was made. In essence, researching in the fourth dimension!

One may wonder, what’s the point?

I could look up Battle of the Bulge in Wikipedia and, naturally, I will be given a brief history of this counteroffensive campaign during the Second World War. It would seem common sense that each consecutive change in Wikipedia would only add to the history with new bits of history being revealed over time.

However, what about more recent history, current affairs or of controversial characters and events? Especially those events or subjects which have caused great divisions of opinion. Now that’s a humdinger!

Wikipedia offers the reader total freedom to browse any revision of the subject at question. This is especially useful when a current narrative is at play, usually of a political or social issue. On looking up information about the animal world or the discovery of a new star to cite a couple of examples, one should be reasonably confident that browsing the current version will suffice. However, relying on the veracity of the current version on more recent or controversial affairs is not so clear cut.

For example, high-profile figures may rise or fall from grace. Perhaps a famous actor or politician committed some sort of offence which outraged the public. Maybe a well-known publication has steered away from the groupthink or narrative of the day.

Information is added and removed at will by those who contribute to the Wikipedia page. Excepting high-profile pages, anyone who creates an account on Wikipedia can make any changes to a page offering the editor to cite references to support the change. However, many of the changes are made on the whim and the emotions of the day.

I know. I’ve tried it myself and it works!

Let’s take an example of a newspaper publication called The Epoch Times.

I’ve not read much of the Epoch Times but judging from some of the articles I have read, many seem to be plausible in their veracity, certainly no less than many other well-established largish media news. Their articles allow commentary and sources are usually well cited. Their subject material is wide and varied and they make no exception to write objectively on such matters in a way that bucks the accepted narrative of the day.

How does Wikipedia describe the Epoch Times?

Let’s start in the present, or at time of writing.

On December 2, 2021, Wikipedia cites it as a far-right paper that opposes the Chinese Communist Party, promotes far-right politicians in Europe, spreads QAnon and anti-vaccine misinformation and champions Donald Trump.

Personally, I did not find much in the way of this publication being far right. Far from it. It does; however, have a strong slant on libertarianism and did have a generally (not always) positive bias towards Trump.

Now if one notices, there is a little tab on the page that says View history.

This brings up every version in which you can read as it was then edited at that time.

Having created an account on Wikipedia, I tried a little experiment in which I changed one word from far-right to centrist. Lo and behold, it worked! However, it was quickly reverted to far-right by a username called Kleinpecan, as shown below.

Scrolling down this list, there are hundreds and hundreds of versions stretching back to 2005. Along with each version, there is information what was changed, when it was changed and by who. In essence, anyone with an account can edit the page and, effectively, change the history of the subject, although for higher-profile pages, the edit option may not be available to you.

Let me say, as a caveat, that you can’t make a gross change in a subject well-known to many. For example, spreading the news that the Nazis set up a base on the dark side of the Moon, as portrayed in a quite funny film called Iron Sky, will certainly not last very long on Wikipedia!

Now let’s see what Wikipedia has to say about the Epoch Times during November 6, 2020.

It describes it as a right leaning newspaper affiliated with the Falun Gong movement and blocked in mainland China. It still mentions the spreading of anti-vaccination propaganda, QAnon theories and the promotion of Trump. But right leaning is quite a bit milder than far right. 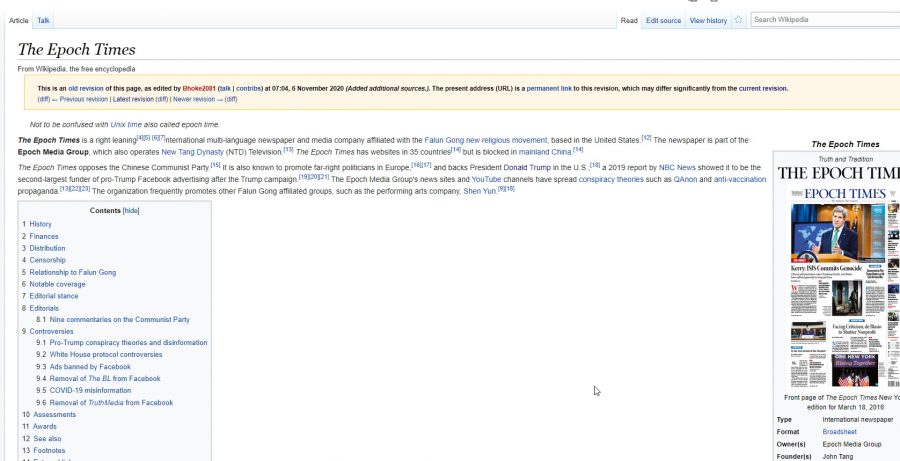 Wikipedia paints a starkly different picture of the publication. It describes it as a multi-language newspaper headquartered in New York City and founded by a group of Chinese-American Falun Gong supporters. It is described as being generally anti-communist and in opposition to the Communist Party of China.

There is no mention of far-right, the spreading of conspiracy theories or a love of Trump.

To cap off the research, I looked at some of the articles during those time snapshots and, frankly, the style of reporting and choice of content had not altered sufficiently to suggest the newspaper had mutated into an outlet spreading conspiracies and right-wing propaganda. The ‘frog-in-the-water’ analogy is demonstrated so well here.

The value of all this is that by correlating the events that took place at another moment in time and how they were then reported and then to compare them with the present, one can make some quite interesting discoveries.

However, this also raises a warning that not everything one reads on Wikipedia is objective truth. But at least we can step back through previous versions of a Wikipedia webpage to identify changes which might have altered the context.

I can only hope that Wikipedia does the ‘honourable thing’ by never attempting to alter or remove past versions.