Shôn Ellerton, Nov 25, 2017
The powder-actuated nailgun is, arguably, one of the most dangerous and abused piece of construction kit. Here is a little story from my personal experience with this tool.

I would like to tell you my story relating specifically to the Ramset J20 Powder-Actuated Nailgun, a now discontinued model, during my late teen years around the mid to late 80s. For those familiar with nailguns, they are an indispensible tool when it comes to rapidly deploying nails through timber into concrete or even metal. During my late-teens, early twenties, I racked up a significant amount of experience in building and railway construction due to our, then, family business of owning and running the Fairbourne Railway in Wales, a tourist steam narrow-gauge railway set in the heart of the beautiful Snowdonia National Park in Wales.

Our family bought the railway in 1983 and, more or less, removed all the old buildings and completely rebuilt with new. We also regauged the 3-mile-length from 15” to 12”, a mammoth task in its own right.

My father, a very capable hands-on man believed in the art of bush engineering, a term he coined for building things very quickly, often involving masquerading and re-using old features. For example, we built living quarters for railway volunteers by converting a portacabin and adding an extension, covering the outside with timber planks and adorning it with a traditional railway-style corrugated iron roof. Another great example is when we converted an old battery-operated milk float into a battery-operated shunter. This was achieved in no more than 3 days, an astonishingly short space of time. Nothing was ever quick enough for my father with respect to build times. This also applied to the large number of railway buildings which we erected onto concrete slabs. Traditional timber framework was pieced together on the ground and then raised in place and anchored into the concrete slab.

Enter the timesaver, the Australian-made Ramset J20 Powder-Actuated Nailgun. A formidable-looking device which almost resembles the look of a sawn-off shotgun. Such a device, in the UK, required a firearms licence; however, under some peculiar byelaw of the Railways Act, it was not required for operators to hold a licence whilst working on railways covered by the Act. The Ramset J20 arrived at our doorstep encased in a large heavy-gauge orange construction case complete with a number of essential components including a selection of nails (tipped with bright conical-shaped orange plastic caps) and a number of powder discharge bullet-shaped capsules colour-coded depending on its charge strength. 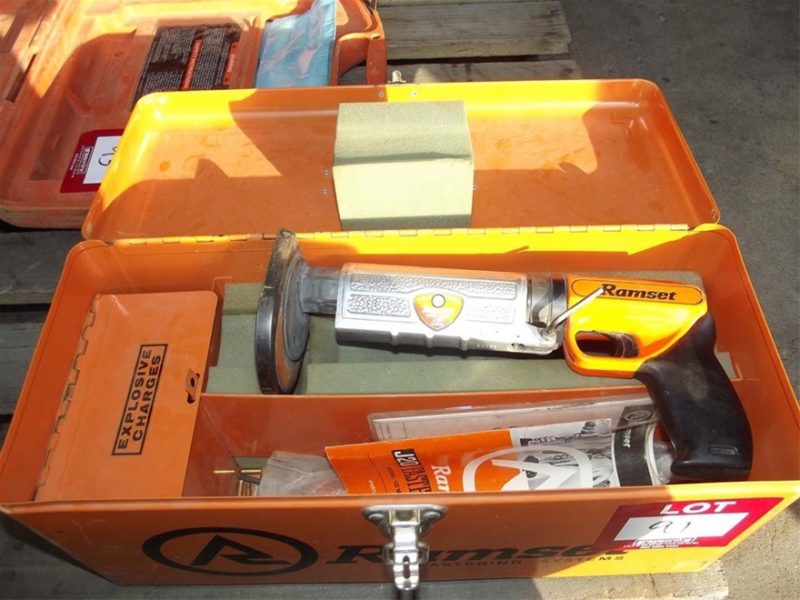 From weakest to strongest, it went as thus; 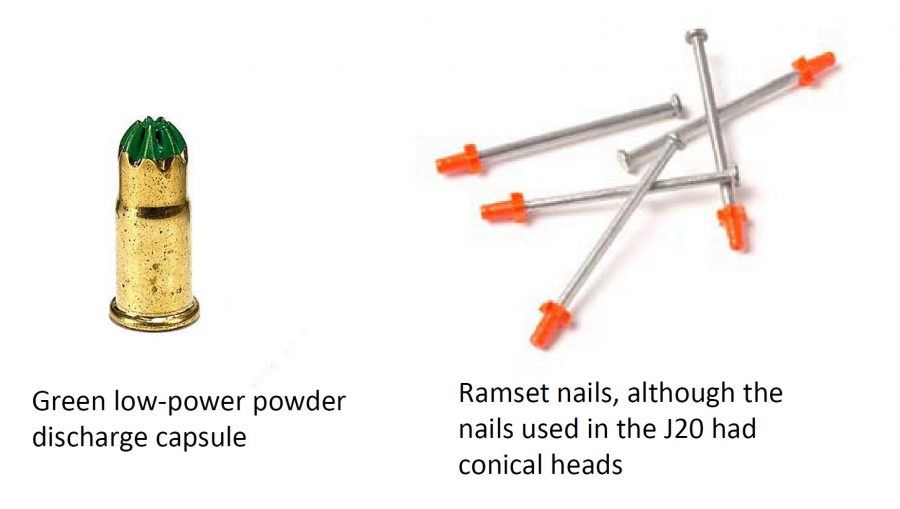 Operating the gun required some degree of experience. Not only did you have to select the right charge strength, but you had the ability to finely adjust the strength by how far you insert the nail into the barrel. Once locked into place, you firmly press the front plate of the gun against the material which you are firing into and then pull the trigger. The front plate needs to be fully depressed in order for the safety catch to be released. If the charge is not powerful enough, the nail will not go through the material sufficiently which means the hassle of removing the nail from the material. If the charge is too powerful, the nail goes straight through; hopefully with no one on the other side!

We predominantly used the gun to affix timber frames into concrete slabs and, indeed, the gun performed very well and saved a good deal of time. We knew which charge to use and how far to insert the nail into the gun. The photo below shows a typical example where we used the gun to affix the timber frame on to a concrete slab. This was to be the newly-built railway museum at the Fairbourne Railway terminus. 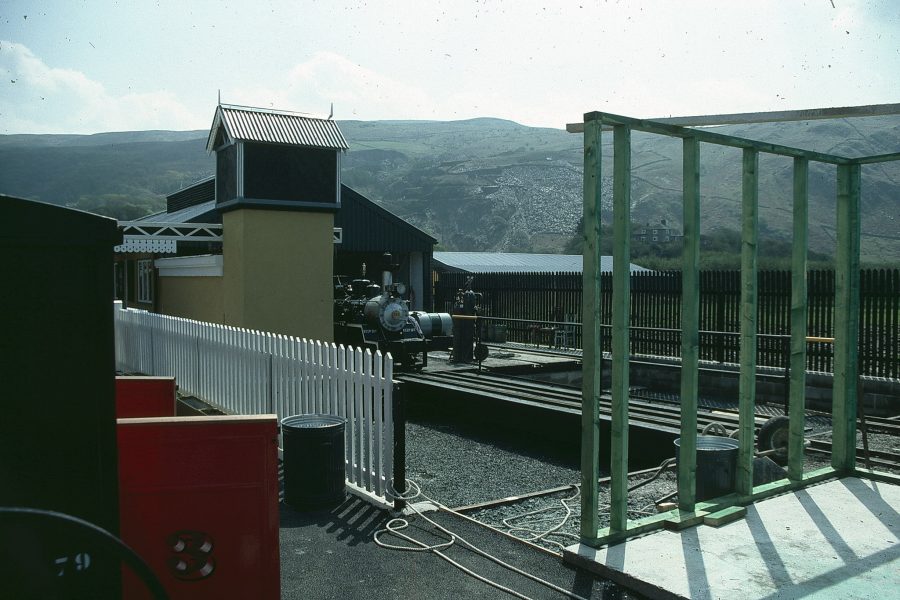 The problem arised when we started getting overconfident with the gun and then starting to use it on other work details. For example, I remember using the gun to affix heavy strips of angle iron into a concrete wall to create a rack for holding bars of metal and wood. Clearly, the yellow charges would not be sufficient so I moved on to the red charges. Even then, the red charges were not sufficient and then I, hesitatingly, moved on to the dreaded white charges. The nail penetrated the heavy angle iron into the concrete with ease along with an enormous bang followed by a cloud of sweet-smelling gunpowder. I set out to completing the rack; however, on one of the discharges, the nail did an absolute U-turn halfway through the metal and nearly came out straight back into me. Clearly, this is a tool not to be trifled with.

On another occasion, my father used this tool on a work detail which really should have involved a drill, bolt and a nut rather than a nailgun. This work detail meant fixing two pieces of angle irons on the ceiling truss framework of the workshop. My father then set out to nailgun the two angles together whilst balancing on a stepladder. He pointed the nailgun downwards at around chest height against the two angles and then pulled the trigger using a red charge. Apart from the loud bang, nothing appeared to happen for the next 10 seconds until I noticed a stream of blood flowing out onto the concrete floor of the workshop. I looked up and noticed that the blood was oozing out of his left temple upon which I had to quickly assist in getting him down from the stepladder as he is well-known for fainting at the sight of his own blood. It so happened that the nail went straight through the metal, continued on its way down to the concrete floor and then bounced back up hitting him in the temple. It happened all very fast.

Unfortunately, guns and anything which can be used as a firing weapon usually holds a special fascination with most of the male population. We were all guilty of seeing what this nailgun could do and started to do some ‘fun’ experiments with it. A typical experiment involved pressing the nailgun against the side of a portacabin and to see if it will go through and out the other side. Naturally, the most powerful charge was used, the white one, and we underwent the experiment. Sure enough, it went straight through all right. It made a clean hole through the first wall, went clean though a canvas suitcase which was housed inside the portacabin and then ejected itself through the second wall sideways continuing another couple hundred of metres until hitting the side of a nearby house. Thankfully, no one was in its path!

The best story involving the use of this nailgun is as follows.

Steve positioned the gun downwards to affix the 2×4 timber into the concrete slab and then pulled the trigger. Not many seconds after, Steve was curled up on the ground holding his foot in distress while stating in these very words to my father, ‘John! I think I just shot my foot!’. We all thought he was pulling our leg until we saw a nail neatly protruding halfway into his shoe. Somehow or another, the nail must have done a turn through the concrete and out straight through the side of the slab into Steve’s foot. Seeing that this, indeed, was a real accident, we ushered for an ambulance. Unfortunately, the nearest ambulance was 13 miles away in the small town of Dolgellau so we had to do the best we can to make Steve as comfortable as possible even though he was part-crucified by a Ramset nail. The ambulance eventually arrived and we all piled in: Steve on the bed, my father, me and a couple of others. Unfortunately, for some reason or another, the hospital in Dolgellau was not able to accept an emergency and we had to make do by travelling the 30-odd hilly miles to the larger town of Aberystwyth. So here we were travelling in the back of the ambulance each of us taking turns with the laughing gas and, generally, having a whale of a time. It was approaching midnight by the time we got into the hospital in Aberystwyth and Steve was checked in to emergency. All of us, including the ambulance driver got incredibly hungry and so we started to look for food. I’m not sure about now, but during the late 80s, looking for food in Aberystwyth at around midnight is a challenge at best. We eventually stumbled upon a Chinese takeaway and took the food back to the hospital. The food was pretty ordinary mainly comprising of overly soggy noodles, stringy bits of unidentifiable meat and slimy glutenous vegetables. Two hours later, once the nail was extracted from Steve’s foot, his foot was bandaged up and we took another ambulance (with more entertaining doses of laughing gas) back to Fairbourne.

Amazingly, I found a before and after photo (pictured below), the first showing that very same slab where Steve had his accident and the second after completing the works. 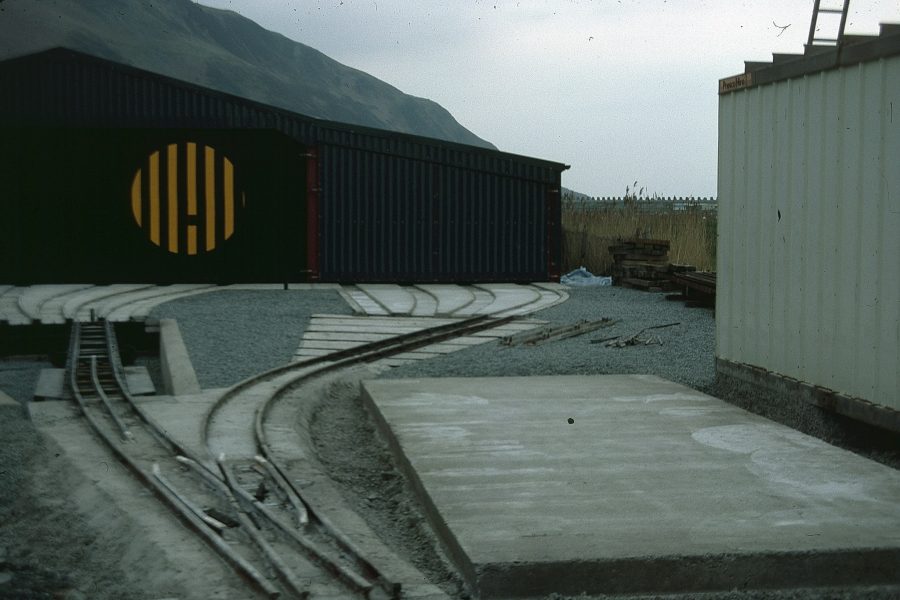 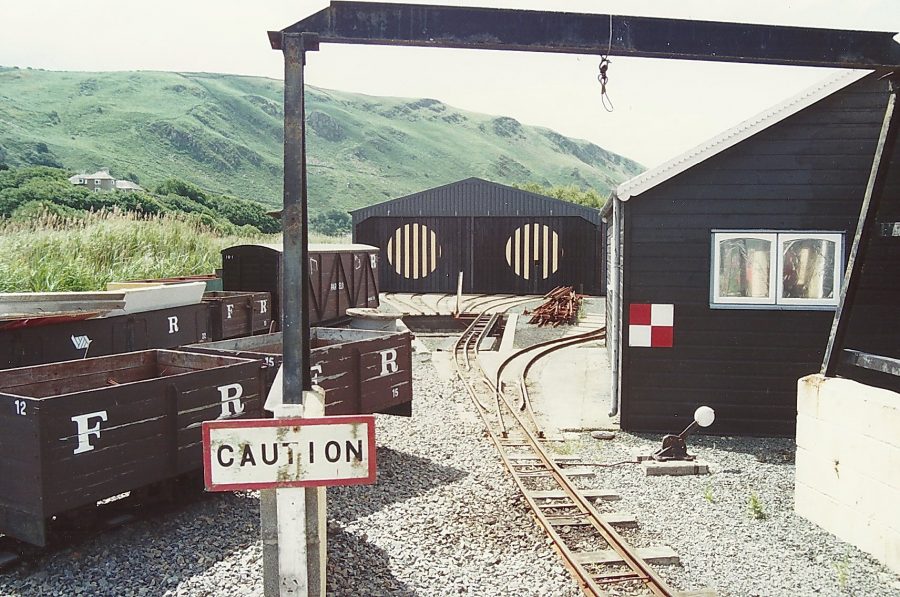 From that point onwards, we decided that we better start adopting a far more responsible attitude towards this tool to prevent the possibility of having a more  serious or fatal accident. We also took note that this tool required regular maintenance to ensure its ‘safety’, an activity we seldom if ever did. We kept the gun locked up and it was then only used when absolutely necessary, which was seldom, considering that there is always an alternative to using a powder-actuated nailgun.

Now it has been quite some time since the late 80s and I have not kept up with the latest variants of nailguns; however, I am certain that today’s strict health and safety regulations have much to say about this, undoubtedly, highly dangerous tool.