Shôn Ellerton, Jul 28, 2021
The most embarrassing incident report I ever had to complete thanks to a papercut I got while mishandling a set of minutes.

I found an old gem of an email from 2009 I sent to myself containing a scanned incident report I had to complete when I got a papercut. Naturally, being a little sceptical and cynical at times, my answers to the questions in the form reek of sarcasm but, even now, not being quite such the rebel as I was, I’m thinking of how crazy and absurd this was.

Before I start, and to put the whole OH&S thing into perspective, I used to manage a team of telco professionals in an engineering consultancy based in Adelaide. From time to time, I’ve had to sign off on a variety of incident forms, some of them being quite severe and most being attributed to dangerous and negligent activities whilst going out on site. There were two notable incidents that scared the hell out of me. One was when one of my staff, a woman in unsuitable shoes, tripped over a new-installed catwalk on a roof of a building just missing the open trapdoor by inches to the floor underneath. The other incident, a near-death of someone slipping on the base of a failed cherry-picker, his head on the ground oozing with blood, while the other was stranded in the hot sunshine in a cherry picker thirty metres over the ground near the remote and dusty town of Sandalwood, nearly two hundred kilometres away from Adelaide. A helicopter was called by the man stranded in the cherry picker and the man on the ground was, thankfully, rescued.

However, on one occasion whilst in the office, I had to fill in what could only perceive to be the most embarrassing of incident forms back in February 2019. A papercut to myself.

At my desk, whilst shuffling various bits of paper around, I caught the top of my fingers with the edge of one, and of course, for anyone who’s had a papercut, they certainly do get your attention. I had a little bleeding, so I decided to get a bandage from the first aid box.

I then proceeded to walk to the first aid box which was placed on top of a set of filing cabinets in the middle of an open-plan office. The office manager had his own separate office with glass walls, but he could see the filing cabinets in plain view through his open door, an obviously deliberate tactic. For those former colleagues that may have deduced who he was, the office manager was a studious looking, softly spoken, bespectacled highly risk-averse sort of a person who has a passion of cycling and fountain pens.

I then proceeded to open the first aid box to get a bandage, and then I peeled one and placed it over my finger. I ticked off in the sheet within the box that I deployed a bandage, which, of course is necessary to ensure that it is always supplied. I started to walk away and then stopped in my tracks when the office manager said, “Is there a problem?”

I said, “No problem. Just a little papercut. Just getting a bandage. Don’t worry, I’ve ticked it off in the supply sheet.”

He said, “Ah! You’ll have to fill in an incident form.”

I replied, “Yeah, now that would be funny wouldn’t it?”

He wasn’t laughing, but rather, looked at me incredulously and then proceeded to explain to me in the most solemn of fashions that I really had to fill in an incident form.

I decided not to smirk anymore uttering “Ah. Seriously?”

And then he began to catastrophize, “Yep. That papercut could develop into a nasty fester from potential germs and bacteria that could be present in the paper, and should you have to be sent to the doctor, we would need a documentation trail of what happened. There have been cases of fingers being amputated from papercuts you know.”

Please understand, that this seemingly hyperbolic statement may not be strictly verbatim, but it is very close to what I remembered all that time ago.

Now, to make this funnier, what I didn’t notice at first was that the first aid kit in front of me on top of the filing cabinets was fixed to the top of it so it couldn’t get moved. I can’t remember if it was screwed on or taped but it definitely did not move when I tried to pick it up. Furthermore, it was in perfect view of the manager to ensure that no one used the first aid kit without drawing in triplicate, the necessary OH&S forms to illustrate the incident. Looking at the earnest expression on the manager’s face and then to the lonely grey first aid box held immovable for all to see, I nearly burst out laughing.

I composed myself, returned to my desk, and downloaded a blank incident form which I then proceeded to fill in. It was a two-page affair comprising of sections describing the incident, a hazard report, risk matrix, job details, injury classifications and so on. However, despite the seriousness of the nature, I injected my own brand of sarcasm and humour to a couple of the questions on describing the incident.

Here are a couple of the questions and my answers in the Incident What Happened section. (text replicated after image below) 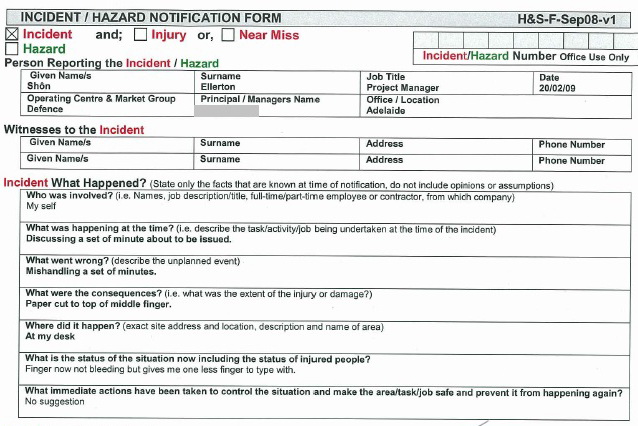 Mishandling a set of minutes.

What were the consequences? (i.e. what was the extent of the injury or damage?)

Where did it happen? (exact site address and location, description and name of area)

Finger now not bleeding but gives me one less finger to type with.

I completed the Risk Rating Matrix giving it a Minor and Unlikely to occur giving it a Low risk level.

I printed it out and completed the rest by hand and then signed it and, then finally, to get my line manager to sign it.

I scanned it, sent the electronic copy into the file storage area where incident forms go to be forgotten and then to print out a hard copy and place a copy in a tray conveniently located next to the first aid kit on top of the filing cabinet.

An hour later, after the ‘injury’ occurred, I was at my desk resuming my daily duties as normal, albeit, with one finger bandaged, while those in my team surrounding me had a bit of a chuckle about it.