Shôn Ellerton, August 25, 2019
Do you suffer from stress and pain on long-haul flights? Tai Chi could be one way to alleviate these symptoms.

Recently, I bumped into an old acquaintance of mine and we started to exchange stories of how to prepare for those long international flights with little legroom to spare. We discussed, among many things, the fear of being cramped on a full aeroplane in economy class, especially for those individuals with long legs.

The Problem of Being Cramped

Many years ago, I remember visiting the infamous London Dungeon, a tourist attraction in London exhibiting waxwork-displays depicting the darker side of history. The museum held a vast array of instruments of torture and lifelike replicas of notorious and odious characters. One of the exhibits was called ‘Little Ease’, once housed in the Tower of London as a form of punishment. It was basically a cell measuring 1.2m in such a way that it would have been impossible to rest by lying down, or even stand up properly. If anyone has experienced Restless Legs Syndrome like I do, you’ll know what I’m talking about. Airline travel is assuredly not quite as bad as Little Ease, but it’s getting there! So how can we deal with the problem of being cramped into a small space for hours and hours? 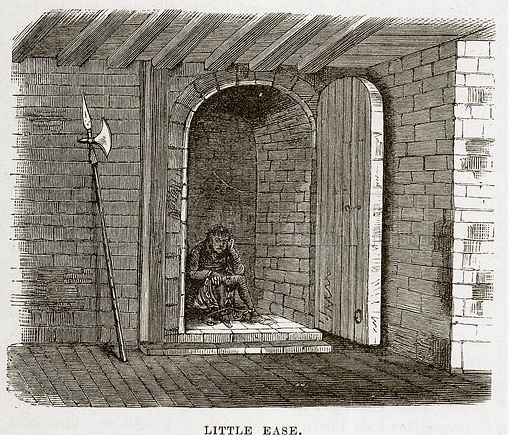 Being in a State of Relaxation

We discussed various ways in which one might be a little more prepared should we have the gross misfortune to be hemmed in like sardines on an ‘all-nighter’ and both agreed that time passes quickly and easily when one is relaxed and not stressed.

So how to achieve this?

The first and most obvious way that sprang to our minds was taking the opportunity to walk and explore the airport terminal before the flight takes off. However, apart from the walk which one needs to take to get to the departure gate, it is unlikely that you will leave your chosen ‘plot of land’ conveniently in sight of the display board and the gate along with all your hand luggage and duty-free. In many cases, you would not be able to once you have entered through to the secure area beyond the immigration control gates. You have now, basically, been hemmed in like pigs to the slaughter!

The second way is to get yourself sufficiently drunk enough before entering the aircraft; however, this is risky business as airlines are at liberty to deny access to anyone who has imbibed excessively. Once on the aircraft, many do choose to ‘conk themselves out’ by ordering a few red wines followed by a whisky or two once boarded on the plane. This does not always work out as expected especially when one wants to arrive at their destination reasonably fresh without sporting a glaring hangover and smelling like a tramp. Moreover, many choose not to drink for a wide variety of reasons.

Reading and viewing entertainment is the third way and certainly kills off some of the time; however, on very long flights, this is not sustainable for many. Ears and eyes become sore and our concentration becomes numb. On night flights, the orange-yellow hue of the cabin lights makes reading books particularly difficult for some, me included. After too much onboard entertainment, we sometimes become so tired that it becomes harder to fall asleep; hence the phrase ‘too tired to sleep’. In any case, it doesn’t solve my restless legs syndrome.

A fourth way could include hard exercise in the terminal lounge. For example, doing your ‘airport’ version of circuit training including a barrage of jumping-jacks, push-ups, sit-ups and running-on-the-spot in the hope that you will become so physically exhausted, you would simply nod away for the next dozen or so hours. Not only is this impractical, it will simply make you unacceptably sweaty and smelly. It would; however, provide unscheduled entertainment to, otherwise bored, fellow travellers waiting in the terminal lounge before boarding the plane. This is as much amusing and annoying at the same time when one relaxes in the sauna and there just, so happens, to be that one ‘fitness freak’ doing hard exercise in the sauna.

The last and fifth way may include some sort of meditation or stretching exercises. From time-to-time, I have seen those who meditate in the lounge before flying. Whether it is to relax the mind from fear-of-flying or some other means I could not say. I’ve seen those who undergo stretching exercises and forms of yoga; however, with the case of yoga, this means being in full contact with the, usually dirty, floor.

Tai Chi, on the other hand, could perhaps, be one of the best solutions combining both meditation and slow controlled physical movement. Moreover, you need only occupy, at most, a 2x2m square space and need not ever sit or lie on the floor. During my last visit to China, I noted how frequently Tai Chi was practiced in so many public spaces. Amazingly enough, I recollect seeing a gentleman undergo some gentle Tai Chi within the aeroplane cabin during a flight from China to Australia in one of the spaces adjacent to an emergency door. Those who regularly perform Tai Chi often state that, immediately afterwards, they feel relaxed and refreshed.

One might be wondering whether performing Tai Chi prior to boarding a flight might look somewhat silly. After all, we don’t want to appear that we are re-enacting Monty Python’s Ministry of Silly Walks! Perhaps wearing a formal suit and tie may not be entirely appropriate for practicing Tai Chi; however, equally so, wearing a suit and tie on a long-haul flight is not a good idea either. Those flying business or first class have enough space to change into more comfortable clothing in the cabin! Best advice is to wear something loose and comfortable. If you really suffer from stage-fright, do your Tai Chi before entering the airport.

Tai Chi is a traditional martial art and a mind-body exercise coupled with deep breathing. It is becoming ever more popular in the West and it is usually not too difficult to find a tutor or class at beginner’s level near to where you live, unless you live in a remote area. My wife, Fang Qin, has been a Tai Chi instructor for many years and runs Meridian Connection Tai Chi, a Tai Chi academy in southern metro Adelaide since 2012. Much to my surprise, the demographics include all ages both male and female. I once had it in my mind that Tai Chi was only for old people! Incidentally, there is a form of Tai Chi in the Chen style which is, without doubt, not for the faint-hearted involving rapid and quick movements. Unlike some other sport and arts which require a minimum entry of fitness and ability, Tai Chi caters to all individuals with varying levels of fitness, abilities (or disabilities) and age.

If you do take the plunge with Tai Chi, why not ask your Tai Chi instructor for advice on which Tai Chi moves to perform for long-haul flights? There are Tai Chi movements which are particularly suited for those in confined spaces and less conspicuous in terms of visual movement.

Tai Chi could be one of the best options for frequent flyers suffering from stress and pain on long-haul flights. Next time, give Tai Chi a go!