What the Hell is Wrong with Our Diet?

Shôn Ellerton, January 1, 2020
The struggle to maintain a healthy diet, the rise of childhood obesity and the influence of our food and drink industries to keep it that way.

I was utterly shocked when I watched Fed Up, a documentary about childhood obesity made a few years back in 2014. Perhaps I’ve been living under a rock but I was horrified to know how obese a 2-year-old could be. There were 10-year-olds so horrifically obese that they risk dying before the age of 20. Moreover, most of the obese children interviewed have obese parents, which seems highly likely that poor eating habits are established through example. The documentary did not cover any aspect of any genetics relating to ‘fat genes’ or peculiar conditions which create obesity in children if, indeed, such conditions exist, and if so, would happen exceedingly rarely. The documentary simply covered the appalling extent of how very poor eating habits are creating a generation of children who may never live past their fortieth birthdays.

Something is clearly wrong with our diet but what?

Over the last couple of months, I’ve chewed up a lot of hours trying to understand what constitutes the best diet for a healthy and long life for our family. Having a five-year-old really puts a ‘rocket up your arse’ to lead by example in terms of what we put in our gobs. If kids see that we eat unhealthily, they will, no doubt, as well.

During the last two months, I’ve changed my diet drastically. I’ve practically eliminated all processed foods, low-fat foods, refined sugars, grains, cereals, breads, pasta and beer. I eat fruit in moderation, eat plenty of veggies, eggs and olive oil and treat myself to cheese, meat, fish and nuts. I can even have a little wine or a nip of whisky from time to time. Previously, I suffered heartburn every single day, but since the new regime, not one case of heartburn, and the bonus of losing a few kilograms. I’m not saying that this would work for all, but it certainly has for me.

I am not suggesting that my child follows the exact same diet, but I am dead certain that sugared cereals, waffles, soda pop, juice, and most of the crap given to children when they go to other kid’s parties or what’s in other children’s lunch baskets at school are really harmful in the long term.

Most parents are aware that candy, cake, cupcakes, fast food and highly processed food is not particularly good for you; however, many are not aware of the, so-called, ‘great and healthy’ foods which we have been brought up to believe we could eat in larger quantities. This includes whole-grain cereals, low-fat foods, eating lots and lots of fruit, avoiding all fats, eating margarine instead of butter, eating only the egg whites and so on. In fact, the food pyramid which so many of us have been indoctrinated with; you know, the one where the fats and meat are at the top and the grains are at the bottom could possibly turn out to be one of the greatest pieces of misinformation ever devised in the history of nutrition. There is evidence to suggest that inverting the pyramid could be a better model, although I would dispense with the sweets and prioritise the vegetables over the fruits. 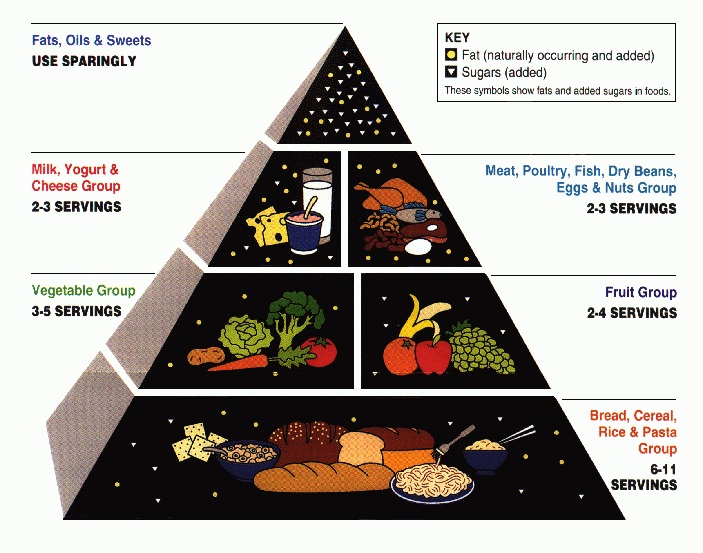 What so many of us have been conditioned into believing

I’ll make the disclaimer here that this article is not an official nutrition guide but rather, my story on what I have observed and how it has affected me.

There is a lot of material out there on the Internet to read on nutrition, but it is dangerous territory unless one adopts common sense, logical reasoning and a thorough methodology in undertaking research. Is ‘dangerous’ too strong of a word? Perhaps. However, if one does a search on the Internet on unusual diets, I think the word is justified. Another thing. It is all too easy in being succumbed into confirmation bias by following only one or a very limited number of podcast, Youtube or blog channels. This often leads to looking up the stuff that one believes is the correct way while dismissing all others.

During my earlier years as a teenager up to my early twenties, I was definitely on the chubby side. I wasn’t unusually sedentary or inactive. If anything, I spent most of my times outdoors. The problem was this. I just ate a lot of food.

In my early teens, I went to see a doctor who put me on this calorie-controlled diet. I remember how the meals were prescribed on the cards and you could only eat so much of this or so much of that. Moreover, you had to ensure that calories in is less than calories expended. My oh my, how that did not work! I just felt like shit most of the time. I was hungry, frustrated and bored with the regime. And yes, there it was, plain as day, all the grains and low-fat foods to be eaten and any of the high-fat foods to be removed from the diet.

In my early twenties, I was still under the impression that choosing low-fat foods and choosing whole-grained cereals are much better for you so I just went mad on eating copious quantities of it. If anything, that made things even worse. I weighed in at a whopping 110 kilograms which is not good for someone under 6 ft in height! Surely by now I should have been aware that this diet is simply not working.

But no, I was still convinced of the model that calories in must be way less than calories expended, so during my final year of university, I practically put myself on a less than 800 kcal diet eating only, again, whole-grained foods and rice and drinking only long-life skimmed milk. I certainly lost a lot of weight. Coincidentally, I lost a lot of hair but whether this was diet-attributed or not is conjecture, but I am suspicious. I still did not feel particularly healthy.

During my mid-twenties during my graduate engineer days, I started to undertake a lot of sport and exercise. I had the time. I rented a flat a short walk away from work and I was single. I played squash, did circuit training, played badminton, played a little rugby but most of all, I did a heck of a lot of jogging. I started to feel like Forrest Gump at one stage. I was running up to 7km each morning before work, followed by more sport or circuit training after work. And I was no slouch either. I was doing 7min-miles sustainably up to 20 miles without refreshment or rest.

At first, it was a very difficult regime, but I eventually really enjoyed it to the point I was addicted to exercise. I went down to 70 kilograms at my lowest point and was fully toned up. But that was not the reason. I just loved running. I still had this belief that you had to eat plenty of grains and pasta, so I did. I had big bowls of breakfast cereal in the morning after running. At work, I ate a whole baguette laden with goodies like pastrami and bell peppers (capsicum), and at home, after more sport, I ate a massive bowl of spaghetti. Yeah, sure. More calories expended than in due to all the exercise. What do you expect?

But then I wrecked my left knee by twisting it badly on a sand dune and had surgery done on it during 2001. I even remember watching the 9/11 attacks on TV when my knee was in a plaster cast. My doctor said that I’d be right as rain in a few months’ time, but alas, my knee never recovered properly, and my running days were over.

What have I done for all these years since?

Since then, I’ve worked in a variety of industries moving from place to place. Many of us are aware that a life centred around career can take its toll on our health. The business lunches, the late nights, the after-work socialising and just, overcoming stress through eating comfort foods having no time to cook properly. My weight, on average, stayed at around 90kg which is still a good 10kg heavier than it should be.

Years and years of doing this. There were moments I joined a gym but usually short-lived as I get incredibly bored with them. Attempting to run again only to find that my knee starts to flare up again. And guess what, I still had this belief that eating lots of grains, fruit and pasta was the way to a healthy diet! Worst of all, I had chronic heartburn.

I recently met up with a friend who gave me a lot of insight into how our diets have become overabundant with foods produced from grains and cereals. Ketogenic and vegetable-abundant diets were discussed. Basically, pretty much everything I learned at school and beyond about what foods we should be eating in abundance was thrown out of the window. Sure, if you happen to exercise enormously, as I once did, you could practically eat anything you like but things have changed. I had to do something.

I followed the principle of maintaining a low-carb diet and yet, not abstaining from the simple pleasures of life like a little wine or two. I’ll see how it goes for now, but I haven’t had had any cravings or undue hunger.

Do we have a chance?

The food and drink industries are very powerful in exerting their influence as to how the way we choose our foods. We have breakfast cereals purporting that they are ‘heart healthy’. We have oodles of low or non-fat replacement foods and drinks. We have soda companies like Coke and Pepsi teaming up with American schools in providing facilities and catering services. On a funny sort of a matter, there was an American soda drink called Jolt, which tasted like Coke on steroids. It proudly said on the can it had twice the sugar and double the caffeine. At least they were honest! But, joking aside, this really is an effrontery on our future generations’ health.

Do we have a chance? If so, the only chance is through education. I’m just surprised it took me so long to discover it.