Focus on Waste, Not Climate Change

Shôn Ellerton, June 30, 2020
By simply cutting down the waste we create, this may be enough to alleviate the effects of climate change.

Back in November 2019, I wrote a rather lengthy article titled Did Anyone Actually Read the Paris Agreement, which discussed the events of the eco-warrior protests by the Extinction Rebellion, Greta Thunberg, overpopulation, renewable and nuclear energy, and of course, the Paris Agreement. Rolling on to July 2020, in the space of just over six months, time has compressed a series of extraordinary events of extensive bushfires in Australia, worldwide pandemics, ideological wars involving race and politics and, without being too dramatic, the breakdown of society and free speech in general. As for Greta, we have not seen much her of late; although, on occasion, one might catch a glimpse of her being interviewed on talk shows hosted by the likes of Ellen Degeneres or discover that she recently published a small book called No One Is Too Small to Make a Difference, an easy-to-read physically small book. Although not the most informative read by any means, it does capture a wide audience including that consisting of many young readers. Whether one reads Greta’s little book or trundles through reams of more serious scientific journals on the topic of environmental and climate changes, there seems little to deny the fact that climate change is upon us and we are, if not partly, responsible for it. There are many who deny that climate change is for real and, understandably so, as it is wholly possible to mould and interpret statistics with data impossible, or at least, difficult to use to prove that climate change is for real.

I, personally, believe that climate change is occurring and that we have a large part to play in it. I am not convinced that climate change is the correct phrase to use as climate always changes but it does seem to be changing very fast. A good example of climate change not attributable to man can be found during the time of the Greenland Norse around 1000 AD in which Greenland experienced a ‘heatwave’, if you call 10 degrees Celsius a heatwave! 500 years later, the Greenland Norse largely died out due to a combination of the climate getting much colder again, their inability to successfully integrate with the indigenous people, relying on imported goods from mainland Europe and not adapting to the landscape of Greenland but rather importing the same values and ways of survival from their home countries. Perhaps a better term to use is, simply, pollution. After all, is it not pollution that contributes to the build-up of what gases are attributable to climate change? And, where does pollution come from? Waste.

Come to think of it, I cannot think of any effect on the climate caused by mankind which is not derived from waste. Each seemingly indestructible plastic package containing a product like a pack of batteries, or worse, fresh produce wrapped in plastic requires energy to produce of which a by-product is waste, in the form of pollution or solid matter. Disposable consumer items like those belonging to inkjet and laser printers (a pet hate of mine) need energy to produce it, which creates waste, and when it is no longer required, it is thrown away, as waste. Leaving lights on unnecessarily. Buying fresh produce from the other side of the planet because it is out-of-season where you are. Failing to properly insulate your house. Leaving water taps dripping. The list is endless and, I for one, have been several times guilty of doing all these things at one point or another.

Instead of focussing on climate change, would it not be simpler to focus on reducing waste? After all, is it not more tangible and measurable to do so? How much rubbish does your household collect in a week? If you could take your rubbish at the end of the week and calculate how much energy you would get if you made a bonfire out of it, how much energy would be released? Please do not do this by the way. You may get an irate neighbour knocking on your door. Think of it this way. Whatever you do not consume, will, at some point or another find its way back into the land, sea or air.

Spreading the mantra to the masses that we must make an effort to reduce climate change is largely ineffective. I remember similar cries for help back in schooldays; however, the wording was a little different being centred more around greenhouse gases and pollution. Certainly, we can spell out dystopian Soylent Green-type worlds of tomorrow to scare everyone that if we do not do something now, it will be too late. However, if we encourage the reduction of wasteful consumerism, which contributes to a reduction of waste, which contributes to a reduction in pollution, which, may further reduce the effects of climate change, then we could achieve, to some extent, the very thing that environmental activists are preaching for. I do cautiously make the caveat of stating that it may reduce the effects of climate change, but I am optimistic that it will do so. Pointing fingers at power plants, oil refineries, manufacturers of products, airline carriers, or any other establishment which creates waste is largely ineffective if those who are pointing the fingers are still consuming the products created by these establishments in the first place. A crude analogy at best, but it’s like me asking for a salary increase by going straight up to the CEO rather than speaking to my manager about it first. Basically, if we use less and waste less, manufacturers will produce less and waste less. Certainly, there are always cleaner and more efficient ways of producing things that we need, but these are separate lines of discussions.

At the very lowest level, where it all starts, is where we do our shopping. Last month, my wife and I went to an Aldi supermarket where they were selling wafer-sliced ham. They were selling individually packaged100-gram portions of ham at a price far below the amount per kilo for the same ham which was available unsliced in large two-kilo bundles. When I mean individually packaged, these are substantial-sized hard-shelled plastic containers mainly enclosing air with a bit of ham stuck to the bottom of it. I understand that, perhaps, there was a surplus available and, as supply-and-demand dictates, price is positioned depending on any number of factors such as product expiry, shelf space or that the product line is coming to an end. Whether it is for these reasons or not, there is clearly a market for producing 100-gram packets of wafer-thin ham, probably mainly by those who buy them for convenience. Activists demanding that manufacturers desist from creating wasteful packaging is far less effective than educating consumers not to buy products encased in wasteful packaging. If nobody buys them, there is no incentive for manufacturers to continue to make them. Manufacturers can make a difference by giving consumers the choice by promoting that their products use less wasteful packaging as a point-of-difference. However, the problem arises when some of these greener choices are more expensive. Some of us will pay more for being greener but most will opt for the cheapest choice.

During childhood, I remember the differences of how people shopped in Germany, Britain and the United States. I shopped with my German grandparents in Germany, my British grandparents in Britain and, my mother, in the United States. From being most wasteful to least wasteful with product packaging, it was, and still probably is, the United States, Britain and Germany respectively. I remember, in a small to medium sized German supermarket, how my grandfather used to pour detergent liquids sold in bulk into empty bottles rather than buying pre-packaged bottles. Buckets of grains, cereals and other assorted produce were available in bulk without the need to accumulate more rubbish from packaging. There was an element of being prepared for these trips and, for some, this mode of preparation would simply not be suitable for all occasions. I understand this wholeheartedly, but to make this prospect attractive, selling products without packaging or selling in bulk in containers like one may find in any number of wholefoods or specialty stores needs to be cheaper. If you, as a shop owner, sell a 900-gram box of Corn Flakes for $5 and offer the same 900-gram corn flakes without the box and charge $8 for it, how many will buy the latter option? The ‘luxury’ of being green is not shared by all groups in our society, especially one in times of an economic downturn.

On the subject of plastic waste, it seems very clear that the global production of plastic has an effect on the atmosphere. A study by the Center for International Environmental Law suggests that the annual global production of plastic equates to the output of 189 coal-fired power stations. As for plastic waste, it depends how the waste is dealt with. Back in 2003, I visited Albania and went to the beach in the seaside town of Durrës, a short railway journey from its capital, Tirana. The beach would have been splendid if it was not for the rubbish scattered everywhere. I was dismayed to find that so many beachgoers simply chucked their empty plastic bottles and half-eaten bags of food onto the beach without even a second thought. The photo I included in the header of this article is one that I took on the beach there. Later, during my visit to Egypt during the Christmas period in 2003, I noticed the same story of litter and plastic being strewn around very near the iconic Pyramids. I took a photo of my Pyramids guide (below) amongst a backdrop of litter. 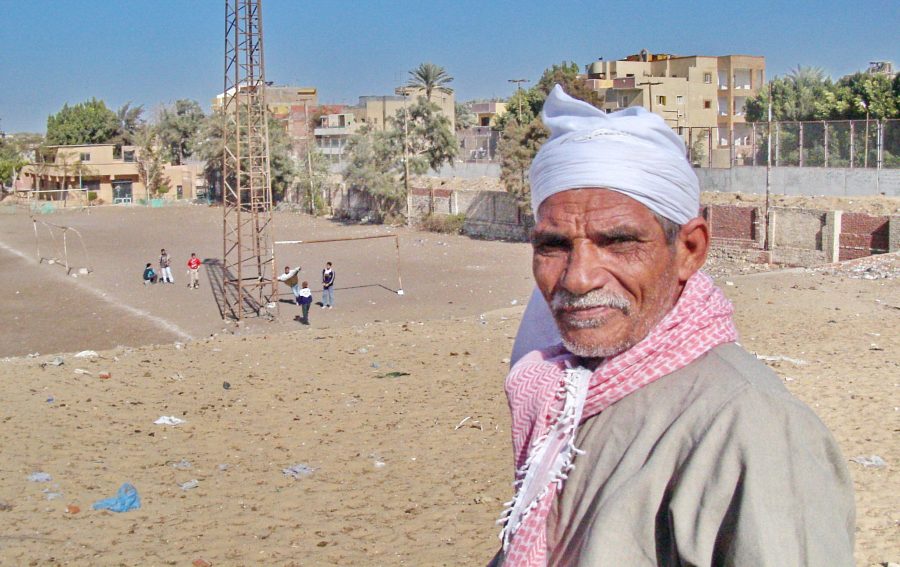 I was later to find out that this behaviour seems to be a regular occurrence in developing or least-developed nations, so I am not at all surprised that most plastic dumped in the sea originates from there as controversial as this may be. However, this is also plainly evident in poorer sections of more affluent societies, but I believe the overall global effect is not quite so profound in terms of the quantity of waste involved.

Incinerating plastic waste conventionally most certainly has a detrimental effect with respect to pollution; however, what about generating energy from plastic waste? There are techniques available to generate energy cleanly from waste plastic and there are exciting technologies available in doing so, for example, using plasma pyrolysis, but these are seldom practiced. Burying plastic as part of landfill or worse, dumping in the ocean may not directly affect climate change but it certainly has a highly detrimental environmental impact. There’s a little island called Henderson Island in absolutely the middle of nowhere. It is literally slap-bang in the middle of the Pacific Ocean, the nearest habited island being Pitcairn of Mutiny on the Bounty fame or infamy if you prefer. One can find, on the beaches of Henderson Island, an assortment of plastic bottles from practically every nation surrounding the Pacific Rim. Even the slopes of Mount Everest are littered with plastic bottles from Woolworth and Safeway supermarkets amongst the scattering of frozen corpses from those that died on its slopes. Man-made pollution and environmental disaster as caused by toxic fumes, oil disasters, deforestation, fresh-water contamination, and general dumping of non-degradable material is, in plain terms, simply diabolical. But I digress. Let us not focus solely on climate change because if we put our efforts into reducing pollution by reducing waste, that may solve most of the problems with respect to climate change. And then, maybe, Greta will be happy.