My Little Story on Mushrooms

What am I thinking? A whole article about mushrooms? Well, let me begin because this is my little story on mushrooms.

Have you ever wondered just how weird the concept of eating mushrooms is? My sister will tell you that mushrooms represents the root of evil incarnate as being basically disgusting, funky-smelly and slimy fungi (which it is) growing up out of dead things. They love to grow in the dark and the damp and basically smell of death and decay. How they sliver and slop over each other in putrefying black juices as they lay steaming on your plate.

Being forced to eat something which you don’t like when you’re young leaves an everlasting impression on you. More specifically, not being forced to try but rather, to eat in its entirety on your plate whether you’ve asked for it or not. I always encourage my son to try something new but never force him to eat something he finds utterly abhorrent or repulsive to his palate. I remember, when I was about five or so, the day my father forced me to eat a plate of slimy oozy over-boiled chewy black mushrooms along with a couple of sausages with very thick skins. It was at the Army and Navy pub in Chelmsford, Essex at the roundabout called the Army and Navy. Apparently, it used to be a very good pub until they closed for business in 2002, but my memories of it are somewhat tarnished. For years and years after this day, my father jokingly used to say from time to time just to irritate me by asking if I fancied some mushrooms and sausages and thick skins!

It was not until many years later when I tried a couple of mushrooms which were fried with butter until golden brown on the surface. How they were delectable indeed. I couldn’t have enough of them. How I wondered how a food can be utterly vile and disgusting and yet, a culinary sensational bonanza depending on how it was cooked. To this day, mushrooms which have been boiling away in a vat of boiling water smelling not to dissimilar to a sludgy sewer-like smell are utterly vile to me. Another culprit are those dried Asian mushrooms which you re-hydrate or boil into noodle soups and other stir-fry dishes. That peculiarly stagnant sort of rotten smell combined with an odd chewy texture as you attempt to swallow the thing whole before it hits one’s olfactory senses is an experience that induces gagging.

However, I came across some of the most beautiful dishes using a variety of mushrooms, particularly so in Germany and France. It takes a lot to beat Pfifferlinge (or Chanterelles), a delicate small light-brown mushroom, especially in a creamy savoury sauce. The Steinpilz or Porcini mushroom is another great savoury mushroom with a delightful texture. There are many others out there. Quite frequently these days, I stroll off to my local market and buy big bags of freshly picked mushrooms which I then later fry up with garlic, butter and a little truffle salt. They compliment a side of spinach and a slab of thick ribeye most beautifully. In a nutshell, the mushroom is the most ‘extreme’ food that I can think of in terms of being both a pleasant or a thoroughly unpleasant experience to eat.

A few months ago, we met up with our Chinese friends during the winter months in Kuitpo Forest near Adelaide. After a veritable feast of open-woodfire BBQ’d lamb, chicken, potatoes, yams, corn-on-the-cobs and many other tasty morsels, it was time to go out mushroom picking in the damp, dark and thick part of the forest consisting of closely-knit young pine trees. Amazingly no one got lost in there. Littered throughout were mushrooms, predominantly of one orange-coloured type which was said to be rather insipid and not particularly tasty, but there were others scattered on the forest floor.

Needless to say, this is potentially one of the most dangerous activities I can think of considering that here and there, lurk mushrooms containing some of the most toxic substances known to man lying in wait for the unsuspecting to devour. The most notorious, of course, goes to the Deathcap (amanita phalloides), an innocuous-looking mushroom which, if ingested, will kill someone in a frightfully unpleasant way over a period of a few days. There is no known antidote apart from, perhaps, undergoing a liver replacement. Furthermore, it is said that the mushroom is pleasant to eat, a cruel prelude to an ugly death. If anyone watched Clint Eastwood’s 70s cult movie, The Beguiled, will know about this mushroom’s notoriety, although it didn’t explicitly mention this specific mushroom. A thoroughly gruesome way to depart from this sublunary abode, which is why I never had the confidence to pick them. Whether you can anymore these days, but I remember whilst living in France for a short spell that you can take your picked mushrooms to a local pharmacy and get it checked out for you for a small fee.

I remember the frequent visits I made to Germany to visit my late grandparents. Behind the home they used to live at is a forest with walking trails and on one section of it, there are a few information panels identifying the local mushrooms in German along with its universal Latin binomial name informing you if they are tasty, not tasty, slightly poisonous, poisonous if eaten raw, quite poisonous and very poisonous. Some of the German names for the toxic mushrooms are blatantly obvious, such as the Satanspilz (Satan’s mushroom) but the most toxic, the deathcap, is curiously known as the Grüner Knollenblätterpilz with the words “sehr giftig” (very poisonous) in red underneath. Thankfully, all living things have a universal binomial Latin name ascribed to them to avoid confusion!

Some mushrooms, many of us are aware, have many hallucinogenic properties; those so-called ‘magic mushrooms.’ The fly-agaric mushroom (amanita muscaria), is the seminal red with white polka dot mushroom which we are so familiar with in pictures of fairy tales or other children’s books. Although this amanita mushroom is poisonous, it is not nearly as deadly as its cousin phalloides species, which looks decidedly plain and ordinary looking. Very small amounts of fly agaric mushroom have been ingested by natives of Kamchatka (in far northeast Russia) for hundreds of years as a mild stimulant and hallucinogen for purposes of recreation and escapism, much like alcohol is for some of us today. Even so, mushrooms have also been used for thousands of years as a source of alternative and preventative medicine. I have an elderly friend who advocates the use of some mushrooms for medicinal reasons, and after a life of researching them as a botanist, has claimed a lot of knowledge and findings about a great many of them as beneficial alternatives to more conventional medicines we may find on the pharmacist’s shelf. But do so at your own risk and peril as, like most alternative medicines, they may have not been extensively proven to be beneficial. It is fascinating all the same.

To cap off my little story of mushrooms, I must recount one of the oddest culinary moments involving eating an extraordinarily large quantity of mushrooms. It was during 1997 in Saumur, France when I went to a restaurant built into a cave on the banks of the River Loire. The restaurant is called La Cave aux Moines, and I believe, it is still in business as of writing. Back in 1997, the only items on the menu were mushrooms, snails and foie gras pate with freshly baked bread. In fact, the only food items on the menu which were not grown in the caves was the pate and the bread! Since then, judging by their website, their menu has expanded to accommodate those who don’t like mushrooms and/or snails. Ironically, I went to this restaurant with my father, who, if you recall earlier, forced me to polish off a plate of stinky overboiled black mushrooms in Chelmsford when I was five or so.

The restaurant is literally hewn out of a cliff as are many abodes along the limestone bluffs around the River Loire. Warm in the winter and cool in the summer. One walks into the chiselled-out tunnel leading to a modern glass-encased restaurant in the middle. It was an arresting sight to say the least. The restaurant was recommended by a local hotel we were staying at and, being avidly curious and despite being warned about the menu in advance, gave it a go. Indeed, the menu offered us was entirely of mushroom platters, snail platters, mushroom and snail platters, mushroom starters, mushroom entrees, mushroom desserts (which were undoubtedly questionable), except for the foie gras pate and bread. The menu was limited to the die-hard mushroom fanatics reminding me of a Fawlty Towers episode in which if you didn’t like duck, you’re rather stuck.

The dinner service was a cornucopia of every edible kind of mushroom I can think of. Choosing the mushroom degustation faire, we were presented plate after plate after plate of mushrooms of every conceivable shape and colour known to man. Now and again throughout the dinner service, a dozen or so snails were proudly presented to us on a specially made paddle board pocketed with little craters to hold the critters in. The first half of the dinner was great but we soon tired and began to feel that we’ve had enough mushrooms for the entire year. In fact, my father pledged that he wouldn’t touch another mushroom for several months. Whether it was a coincidence or not, we both experienced very odd dreams for several days. Perhaps all mushrooms, regardless if they are deemed edible or not, have varying degrees of chemical substances which affect the brain in psychedelic ways, who knows!

So there endeth my story on the mushroom!

Mushroom identification signs in the woods around Bad Kissingen in Germany

Various photos I took of mushrooms around the Adelaide Hills. Note the fly agaric mushroom with the twenty-dollar bill on it.

The mushroom and snail cave restaurant in Saumur, France. My father looking decidedly uncertain about the meal which is to follow.

Another picture of the cave restaurant back in 1997. It looks remarkably similar now according to the website. 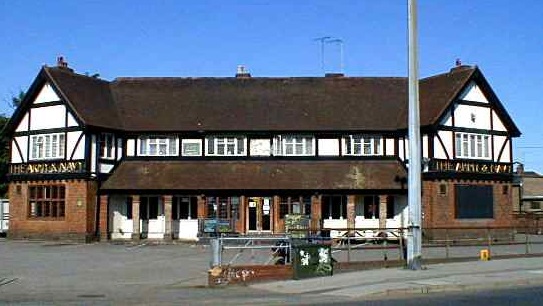 The Army and Navy pub in Chelmsford (now gone).